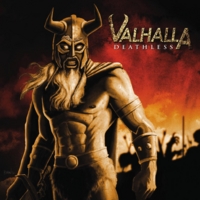 A band that impressed me out of the gate with their Cellador/ Dragonforce-like sound a few years ago would be Indiana act Zephaniah. Their 2008 album "Stories from the Book of Metal" happened to be one of my favorite self-released efforts of that year. So when I receive an EP featuring two members of that defunct group (guitarist Justin Zych and vocalist Logan Detwiler) in a new five-piece metal band called Valhalla, my ears perk up with anticipation over another stellar product. The quintet’s lineup includes keyboardist Paul Kendall, bassist Jeremy Harmeyer and drummer Patrick DiGangi, and for a 5 song debut "Deathless" is much more traditional and power oriented, still chock full of shred-worthy passages but definitely dynamic and memorable.

Where Valhalla separates from the pack is each musician gets a chance to showcase their skill set and talent- all for the sake of the individual song. Jeremy opens "Vortex" with some heroic-oriented bass play, while Patrick keeps the tempo simplified in a solid mid-tempo anthem format- in comparison to Paul’s classical-oriented keyboard elements for the heavier "Self-Imposed Hell". Logan’s melodies and range have taken on more of an expressive, emotional ability: beyond the realms of normal traditional/ power metal vocalists into the upper echelon of the top rock singers period- Brad Delp, Steve Perry, Lou Gramm caliber.

A song like "Rain" has this slower, progressive quality that you normally hear from European bands like Pagan’s Mind or Circus Maximus, not an Indiana outfit like Valhalla- the heavier crunch of the guitars contrasting the echoing keyboards and lower melodies which makes the song very cinematic in a hypnotic fashion. My only disappointment is that fact that 5 songs is not enough to quench my thirst for Valhalla.

Let’s hope the record labels of the world are smart enough to pick up on this very talented band. Great musicianship and songwriting, killer performances, proof that if you look deeper into the scene you’ll find bands like Valhalla that can compete with many of the veterans in the scene.