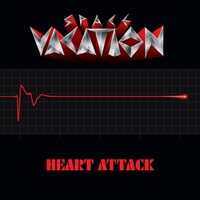 A traditional metal trio from California, Space Vacation contains in its ranks ex-Vicious Rumors guitarist Kiyoshi Morgan. Their second album "Heart Attack" is a 10 song, 44:32 effort that could have appeared in 1983 just as much as it hits the streets 30 years later. Bassist Scott Shapiro tackles the vocals with a fun loving hard rock meets British metal charm- "End of the Bender" and the up tempo "On the Road" very in line with Diamond Head, Def Leppard and maybe a twinge of Geddy Lee from his older days.

Expect quick hitting guitar hooks (often doubled up by Kiyoshi for Thin Lizzy/ Iron Maiden harmonies), straight forward drumming out of Eli Lucas, and rhythms/ riffs that make you yearn for cardboard flying V’s, denim jackets filled to the brim with band patches and a time when vinyl was king. The minimalist cover art complete with a logo straight from the old Tandy/ Radio Shack computer days and basic production values (meaning as little studio enhancement as possible- you almost feel like you are there in the room as they recorded this) keep the focus squarely on the songs.

"Bro Hammer" should evoke audience response from the gang chorus as well as the culturally moving solo maneuvers- a guitar hero’s delight indeed, while "Devil’s Own" stretches Space Vacation into moodier territory, opening with acoustic guitars as the riffs and melodies traverse "Act III" / Death Angel era meets older Omen. Given the upswing for interest in this sub-genre, Space Vacation should have no trouble gaining appeal with European and Far Eastern audiences- as this is street level, early influenced traditional metal played from the heart.