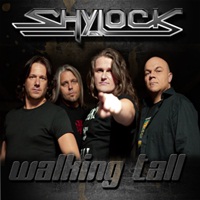 "Walking Tall" is the sixth studio album for German hard rockers Shylock. In the interim since their last release "RockBuster" in 2010, vocalist Matthias Schenk and guitarist Johannes Amrhein started a new band called Cosmic Black with drummer Ramy Ali (Evidence One, Iron Mask, Sommerville/Kiske among others) and had a few lineup shuffles to deal with – as they are now a quartet with bassist Bernhard Schwingenstein and drummer Achim Thiergartner holding down the back beats. Yet the time passing hasn’t affected this 13 song album adversely, as "Walking Tall" continues to subscribe to the Skylock philosophy- ‘don’t bore us, get to the chorus’ type of rock ‘n’ roll.

The title track sets the tone with its instantaneous back and forth hook between the stop/ start guitar action with the vocal and a killer mid-tempo feel with multiple harmonic moments during the chorus. It is something to make audiences rise out of their chairs and replicate the melodies to prepare for future live gigs when Shylock hits their town/ city. The follow up "Rock DNA" features a lyrical outlook of a band and its fans, the explosive energy of musical connection that features a killer, quick moving solo spot that Johannes uses to amplify the arrangement appropriately. Matthias overall has one of those breathy German vocal deliveries- he will not be mistaken for pure potent power, instead settling for keeping his mid-range at the heart of these songs and injecting a little tenderness for deeper impact.

Shylock don’t mince words or time- much of their songs are bare bones basics and designed for head shaking, body moving, foot tapping appeal. Early Bonfire and longtime Jaded Heart fans will savor winning material like "Sad to Know", the swanky "She Came Along My Way", and harmonic anthem "Right Now Or Never". With so many bands competing for your hard earned money, this band aim to keep the focus directly on entertainment through solid arrangements and equally solid hard rock performances.