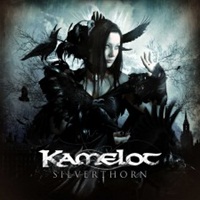 When a veteran headlining band like Kamelot makes a major lineup shift, people ponder not only who the new member will be but how the subsequent studio effort will be received. When Roy Khan announced his departure, guitarist Thomas Youngblood still had touring obligations to fill for their previous album. Fabio Lione from Rhapsody (Of Fire) did a fabulous job, but we all knew that he would not be leaving his primary act as a lateral move. The choice to enlist Seventh Wonder vocalist Tommy Karevik makes complete sense: his range and ease of conveying power/ progressive metal emotion and delivery already well known through his previous studio work.

"Silverthorn" comes at a critical juncture in Kamelot’s career. The previous two studio albums with Khan (2007’s "Ghost Opera" and 2010’s "Poetry For The Poisoned") introduced simpler, modern elements to their dark power/theatrical oriented metal sound, so many are curious if with Tommy the quintet would return to their glory years of creativity and execution- or follow the mainstream path. No worries long time Kamelot followers: the band return in part to their "Epica" and "The Black Halo" albums with this 12 song, close to 54 minute record.

"Sacrimony (Angel Of Afterlife)" is an engaging up tempo start, complete with a bevy of Oliver Palotai’s keyboard orchestration parts as Tommy dances up and down his register and guest clean/ death vocals from Elize Ryd (Amaranthe) and Alissa White-Gluz (The Agonist). Other cuts that should meet with audience fervor include the charging "Torn" with Casey Grillo’s skilled double bass/ fill maneuvers and an addictive choir chorus while the exotic chords energize the sound scape and the three part, nine minute plus epic "Prodigal Son" – alluring with all the extra instrumental setups, bells and whistles, the start is very slow and somber with acoustics and low guitars before the choirs, electric bombast and off-time tempo changes transform this into one of their best longer songs in their 20 year plus history.

Kamelot know what the fans desire from their darker power metal style, and they deliver with "Silverthorn". Back in the early 90’s when this style was a dirty word in North America, I don’t think anyone would have believed their ability to breakthrough in a headlining capacity back home. Nowadays they are revered as one of the elite in the genre, and I think Tommy makes a fine addition to the group.