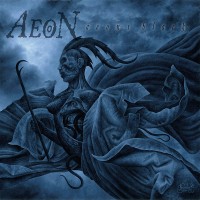 Sweden’s Aeon return with their fourth full length "Aeons Black"- a 15 track, 50 minute excursion into the land of fierce death metal. The shorter 1 minute elements of "Aftermath" or "The Voice of the Accuser" serve a sense of transition as the quintet volley furious, relentless riffs and speedy blast beats against equally vicious mid-tempo death parts. The guitar tone from Daniel Dimi and Zeb Nilsson has this tremendously evil and pummeling nature – mirroring the rhythmic triplets from drummer Arttu Malkki on "I Wish You Death".

You’ll get the requisite numbers that accent squeals at the end of riffs while vocalist Tommy Dahlstrom growls like the beast from below on "Nothing Left to Destroy" and the slow, crushing "Blessed by the Priest"- along with occasional numbers where the tempo takes a half time nosedive sure to wreck your neck such as "Dead Means Dead". What I enjoy most about "Aeons Black" is the fact that the songs are not stuck in one constant ‘brutal’ tempo- the band understands that you can display waves of dynamic emotion even in such a heavy genre as death metal.

This is one of those cases as well where the cover art matches up perfectly to the music you would expect to hear: confident, aggressive, and true to the vision at hand. The Scandinavian songwriting touch matches up to slight American influences in terms of aggression – generating a sonic one-two punch sure to appease old and new Aeon brethren.