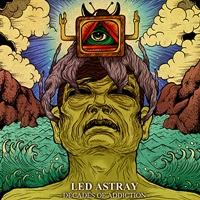 My major dissatisfaction with the 11 tracks on "Decades of Addiction" is just when I would enjoy a certain tasty riff, the next change would be something highly predictable and obvious for metal-core/ breakdown fanatics more so than the deep, knowledgeable death metal maven. "Reaper of Fate" has one of those juvenile, stop on a dime repetition riff parts that should have been left on the rehearsal room floor- and at other times the trailing guitar squeals make me want to smash the record into smithereens.

This is a case where all the insanely hyper blast parts and whirling speed picking coupled with drop on a dime breakdown/ mosh sections equal a roller coaster experience that only the most indiscriminate fans will enjoy. Led Astray indeed live up to their moniker on this second album. Anyone over 25 probably can’t relate to this cross-pollinated death-core-grind sound.

BLOODBOUND – In The Name Of Metal