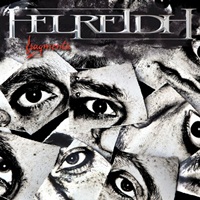 After a 13 year hiatus, the Italian progressive metal band Helreidh returns with their second album "Fragmenta" on the new sub-label of Pure Steel Records, Pure Prog Records. Founding guitarist Yorick and drummer Luca Roggi gain three new members in the form of ex-Raising Fear bassist Francesco De Paoli, keyboardist Aligi Pasqualetto and vocalist Max Bastasi- and it seems that the time away has worked to their songwriting and stylistic benefit.

With 8 tracks and 45 minutes of music, "Fragmenta" is not typical of most progressive metal from Italy that may batter your brain with endless syncopated shred runs and piling riff and after impressive technical riff that will take you years to comprehend. Helreidh is more in line with Savatage or Germany’s Poverty’s No Crime where the art of subtlety and contrast creates the left of center work – be it the dark chord schemes against a natural piano passage for "Exile (We Dot Delen Ato)" through the driving guitars against a 70’s like Genesis/ Kansas keyboard outlook for "Zep Tepi" there’s plenty for your ears to wrap around if you are willing to isolate the songs.

As a vocalist Max would not be placed in the upper tier- his range is wide but I wouldn’t say he has a strong, commanding aspect to his voice. Michael Sandler from Saga and possible a lower Roy Khan during the early Kamelot years come to mind the most on "In Hoc Signo Vinces" and the quieter, reflective ballad "Orfeo’s Lament". The cover art with cut up pictures of eyes doesn’t really set up the contents adequately- probably reflecting their uncompromising progressive metal outlook- so please investigate further beyond judging a book by its outside packaging.

The best acts in this genre separate themselves due to their own innovation and desire to keep things fresh from song to song, album to album. Helreidh as such should appeal to those who like their music melodic, sharp, and moving all the same.

ASHES YOU LEAVE – The Cure For Happiness