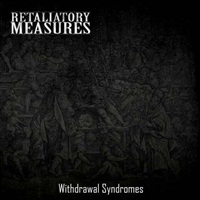 Forming in 2009 and releasing a demo plus a promo CD within the first two years of existence, you can tell that Finnish deaththrash/ Bay Area-influenced quintet Retaliatory Measures appear to know what they want and are in a creative flow. "Withdrawal Syndromes" is their debut album, and only one of the ten tracks makes the grade from those independent/ unsigned days (the early Exodus sounding "Existence"). The group’s sound has a lot of those tight start/ stop guitar and drum movements well known for thrash- along with the growls and occasional use of blast beats that have become synonymous with death metal.

Occasionally the guitar duo of Kalle Hahtamo and Janne Halima display a flair for the progressive touch in the spurts of lead breaks and instrumental sections- most notably within "Withdraw" and "Revulse", which help separate Retaliatory Measures from a mere second generation copycat of their influences. Vocalist Pessi Haltsonen lives and breathes deep grunt death work in his lyrical delivery- sounding as if he’s submerged in a swamp fighting for air to survive. The effect raises goose bumps in the same way as taking in Before The Dawn or Scar Symmetry on opener "The Offering" and even continues on a slower, slightly crunchier anthem such as "Soap" to prove the band wants to keep its feet on their own course.

The cover art depicts an older scene during ancient times when death by hanging was much more commonplace- an intriguing piece indeed if you are willing to spend the time to see the detail of the people. At 43 minutes this is an excellent slice of Finnish metal, throwing down a lot of Exodus and Annihilator riffing but wrapping it around the Scandinavian extreme nuances. By the time you hit the tribal drumming and choppy stair step guitar elements in the 6:13 "Since Nothing", Retaliatory Measures leaves the listener drenched in sweat and awaiting more.