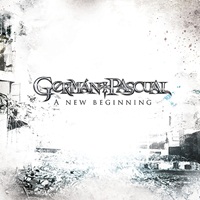 The vocalist for the last Narnia album and current co-vocalist of Divinefire blazes his own trail with this debut solo record "A New Beginning". These 10 songs reside in a melodic power metal realm as German ascends to the upper reaches with a firm grasp of Ronnie James Dio, David Coverdale, and Jorn Lande as mentor reference points. Most of the material resides in that faster, neo-classical inspired realm a la Narnia or Rob Rock- "Open Your Eyes" and "If the Sky Would Fall" especially entertaining for those who live for shredding escapades, thunderous double bass, and epic, high from the heaven melodies.

A couple of times on the record I felt the riffing veers a touch to close to the down tuned, modern staccato feel ("I Call For the One" especially), but the playing is top notch and I assure you that if you are looking for a boatload of guitar hero worthy parts, you’ll find them on "A New Beginning". Guitarists Carl-Johan Grimmark and Jani Stefanovic from Narnia and Divinefire respectively contribute their skillful riffing and taste making to the proceedings- some of their best work occurring on the heavier "Fate of the Blind" and piano fueled opener "Seek the Truth".

German understands that a traditional, power metal effort needs certain components to leave a lasting impression beyond a couple of cursory listens. The tempos have to vary. The melodies need to be strong and memorable. The production values need to be top notch. Overall, the songwriting and performances make "A New Beginning" an outstanding release for those who live for Masterplan, Narnia, and the "Afterlife" era of Nocturnal Rites.