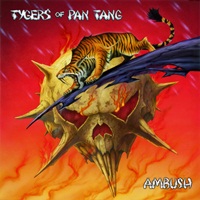 One of the originators who spearheaded the New Wave Of British Heavy Metal movement of the late 1970’s to early 1980’s, Tygers Of Pan Tang decide to team up with producer Chris Tsangarides who they worked with on 1980 album "Wildcat" and 1981’s "Spellbound" to deliver another potent studio album "Ambush" for 2012. Guitarist Robb Weir remains the sole original member of those early days- and while many debate the consistency of those latter albums, I’m choosing to look at these 11 songs on this current lineup’s merits and abilities. Armed with a new bassist in ex-Blitzkrieg’s Gavin Gray, the quintet play very directly, keeping in mind catchy guitar hooks and bluesy, slightly sarcastic vocals along with a rhythm section who know how to fire off four/ four meter at various mid-tempo and slower measures.

"She" contains a killer flamenco acoustic guitar solo section from Robb while Gavin holds down a seductive, funky groove. Lyrically the band subscribe to loving life and partying, with "Rock & Roll Dream" channeling the struggle between what people may expect you to do versus your own vision and desires for stage life- while "Hey Suzie" is one of those long lost youth love numbers and features a cool talk box main riff and vocalist Jacopo Meille has a fun, open approach almost as if he’s channeling the best of Robert Plant, Phil Mogg, and possibly Jeff Keith from Tesla.

The crux of the band’s philosophy musically is to keep things as natural and pure as possible. You can’t expect veteran artists to always modernize their sound- the changes have to be natural and make sense. The comforting mid-tempo guitar crunch provided by Deano and Robb on "These Eyes" and the slightly faster throwback number "Speed" will get the most airplay. And I think the artwork from Rodney Matthews is vibrant and indicative of their professional attention to detail- another timeless quality the younger acts should aspire to become.

For what the band is trying to accomplish in terms of the current hard rock and metal marketplace, "Ambush" does offer a number of air guitar moments that aren’t purely shred tactics and the pipes of Jacopo can handle all eras just fine on the live front. Overall, it’s a good record that shouldn’t tarnish the brand’s reputation at all.