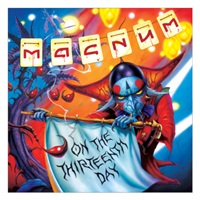 Still cranking out classic melodic/ semi-progressive hard rock 34 years after their debut record, UK act Magnum do not wish to merely parade their old catalog out to consumers- as "On The 13th Day" represents another fresh 11 song set of original compositions. Vocalist Bob Catley, guitarist Tony Clarkin, keyboardist Mark Stanway, bassist Al Barrow and drummer Harry James play their material with a veteran sense of sophistication- letting a song like "So Let It Rain" casually pour over with The Who as inspiration, then taking on some "Kasmir"-like atmosphere for the heavier follow up "Dance of the Black Tattoo".

Bob may not possess the earth rattling pipes of younger men in the business, but his sense of restraint and tenderness comes in handy on a quieter, contemplative cut like "Putting Things in Place" with the right nuances of background choir vocals and Mark’s up front keyboard bringing the conclusion home safe and sound. I really felt like the second half of the album appears to be a touch stronger than the first half- there’s something about the 7:20 opener "All The Dreamers" that appears to have too long of a set up to really hit you by the time the main Deep Purple-ish guitar riff and near to far keyboard strains envelope the sonic landscape. Maybe the oddly dramatic "Blood Red Laughter" with its darker, progressive guitar against a straightforward rock tempo would have been a much better start- but Magnum still deliver the goods as far as I’m concerned with a fitting, almost analog production quality to things.

The glory days of the group may be decades past, but they continue to bring out a faithful following whenever they tour. "On The 13th Day" contains enough bite and mid-tempo songwriting class to appeal to most who love old school melodic hard rock- do not let their creativity go to waste.

SO MUCH FOR NOTHING – Livsgnist