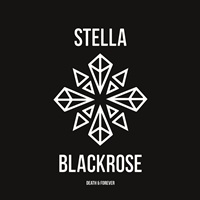 My first exposure to Danish hard rock quintet Stella Blackrose comes in the form of this second album "Death & Forever". I tend to gloss over bio bravado at this point in life, because if you work hard enough and long enough in this business, positive attention will come your way without emphasizing awards, chart positions, or numerous plum gig or festival appearances. The main selling point for these 10 songs is the female spitfire vocals from Rebecca Armstrong- her resonance, spirit and spunk cut from the cloth of Ann Wilson, Janis Joplin, Grace Slick with a modern rock edge.

Musically songs like "Propaganda" and "Rest Your Head in My Fire" sit in that post-grunge/ alternative melodic rock world- emphasizing smooth guitar hooks and drum tempos designed for low brow audience bouncing. It’s one of those gray areas where I’d love to see the band take some more outside the box risks with their songwriting- because the more memorable acts in this crowded field offer a little twist or nuance to the table to differentiate themselves. The melancholic nature to a track such as opener "My Sanctuary" where the clean guitar lines and building drum movement is something I hoped to hear more of as the album moved along- and instead I felt a distant push and pull between darkness and commerciality.

There are some killer musicians in Stella Blackrose- and I’m happy to see ex-Invocator drummer Jakob Gundel back on the scene- but "Death & Forever" to me is one of those records that I need to be in the right mood to fully engage and appreciate. Maybe the third album will turn the tide.

BEYOND THE GATES – Day 1 – Bergen, Garage