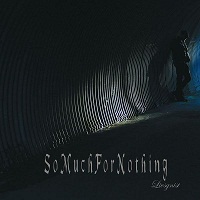 SO MUCH FOR NOTHING – Livsgnist

Oslo based So Much For Nothing seems to be a part of some kind of depressive black metal movement. Core members from bands such as Sarke and Urgehal have gathered here to tell us about the darkest sides of life on their first full length album.

And they do so with a kind of music that is well defined within the borders of extreme metal, yet also quite melodic and well produced. Most of the songs are in mid-tempo, at least compared to the typical blast beat driven black metal. A song like “Suffer In Silence” is even quite slow in pace. The speed lies in the classic black metal style tremolo guitar riffs. There are exceptions to this rule as well, such as the almost heavy metal like guitar solos in the songs “Suicide Syndrome” and “My Precious”

The lyrics deal with life’s struggles, depression and the ultimate consequence of these matters, namely death itself. The lyrics are often very direct. Combined with spoken vocal parts and various voice acting samples, it tends to get too direct for my taste. The vocals are all in all a weaker point on this album. The screams are ok, but nothing special and they get tedious during parts where several layers of screams are on top of each other at the same time. There are a few vocal parts in the opening track that are sung with a “clean” voice. This is something the band needs to work harder with or they should consider dropping it on future releases. The voice is barely in key and the vocal lines sounds too random the way they are sung over the riff. Personally I don’t think the use of the Norwegian language in this part, and in later songs on the album, works either.

A highlight on the album is the epic “Suffer In Silence”, complete with strings and an interesting progression. All in all, the music on the album is not bad, even though an entire album with this stuff feels a bit too long for its own good. The problem is, and I do have to be subjective here; these songs do not speak to me. It’s for someone else. The music is interesting enough, but the lyrics and the way they are performed come off as cheesy and sometimes downright annoying. Others might enjoy this more, so worth a check if you are into this particular style of metal.