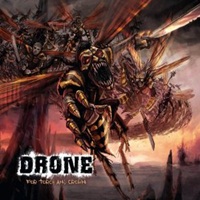 DRONE – For Torch and Crown

Winning the Wacken Metal Battle back in 2006, this act from Celle, Lower Saxony Germany is now on their third studio platter with "For Torch And Crown". The opening strains of "Format C" evoke memories of "Blackend" from Metallica, but once the main riff and good cop/ bad cop vocals kick into gear, you get the sense that Drone has more in common with modern metal core and hard groove acts than pure out thrash. "Making Believe" occasionally has flickers of triplet thunder, yet Moritz Hempel’s Fear Factory meets Grip Inc style vocal employment is satisfactory at best.

I worry about the depth of lyrical content when taking in titles such as "Zombies In The Moshpit" or "Croak In Your Waste" – and I found far too many instances of the American Killswitch Engage breakdown parts plus Soilwork clean choruses (both prevalent in the title cut) to make it past a couple of cursory listening sessions. The much more heads down "Burning Storybook" and "Short Way Down" (the latter containing some blitzkrieg lead work from Marcelo Vasquez Rocha) show some promise that Drone can write material that doesn’t resort to all the common themes of the genre.

What does all of this mean in the end? For my tastes, Drone appear to have more of their eggs in the current, younger generation metal model than being purely thrash a la the Bay Area or domestic Teutonic scene. "For Torch And Crown" will be much more palatable to the aggressive late teen to mid-20’s marketplace, and only necessary when I prefer to unleash pent up stress of the most negative kind.