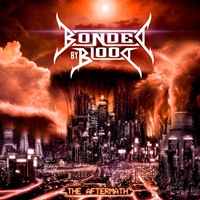 BONDED BY BLOOD – The Aftermath

Third albums are often seen as the make or break propositions for a band’s long term success. If you can’t figure out how to establish your own niche by that time, it’s probably best to seek out new avenues in terms of major lineup changes and/or breaking up the band altogether. California’s Bonded By Blood are at that third album threshold with “The Aftermath”- along with a vocalist change as Mutants Of War singer Mauro Gonzalez replaces Jose Barrales who performed on their first two records. Based on numerous playbacks with these 11 songs, the quartet up their skill level a few notches and this new level of thrash mastery should bring them the acclaim and fan base they desire.

The title track for instance features a number of bass heroic parts from Jessie Sanchez and mystical stair step-like guitar tracks that are in line with early Forbidden or Heathen. “In A Wake” has that relentless speed drumming from Carlos Regalado during the verses and keeps the double bass flowing even when taking the tempo down to more of a pit worthy Exodus crawl- the sudden stop for Juan Juarez’s choppy guitar movements sure to be a crowd pleaser in future Bonded By Blood set lists. Mauro’s vocals appear to have more fierceness and less of a maniacal cackle, again evoking Russ Anderson comparisons for his mid-range and lower explosiveness in “Shepherds Of Rot” or instant head cracking “Left Behind”. A surprising move for the band is their take on the Rage Against The Machine classic “Killing In The Name” that appears as a bonus cut- proof that even thrash bands can expand their influence horizons and make it work.

Bonded By Blood want to be taken no longer as a new thrash act riding on the coattails of veterans- “The Aftermath” should push them to new levels of respect amongst the critics and fans alike. Bravo gentlemen- I can’t wait to hear what will follow in the future.

METAPHYSICS – Beyond The Nightfall