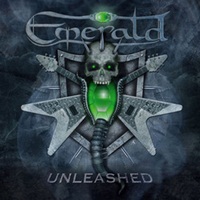 A Swiss act that doesn’t worship at the altar of melodic hard rock? Yes indeed, the veteran sextet Emerald choose to deliver old school power metal with inspiration from North America and mainland Europe on this sixth full length “Unleashed”. In existence for 17 years, the follow up to 2010’s “Re-Forged” feels very comfortable for latest singer Thomas Winkler, as he delivers sustained melodies in the fine tradition of Warrel Dane, James Rivera, and others in that caliber.

The songwriting does appear to have taken on more of a direct fullness that relates to North American inspiration than the more brooding, expansive material on display with “Re-Forged”. Older Northwest metal like Queensryche or Fifth Angel comes to mind right out of the gate with the explosive opener “Face Of Evil”. Their Blind Guardian/ Rage affinity comes into play during the guitar buildups and soloing for “F.T.M.”- with drummer Alex Spicher fluctuating between a soothing mid-tempo groove and then pushing the foot pedals up a few notches for the instrumental and chorus sections. Current Aska/ Banshee singer George Call makes a guest appearance on the speedier highlight “Eye Of The Serpent”- his high pitch action given the arrangement a militant strike that correlates to the lyrical outlook. The cultural strains of the past haven’t been forgotten for long-time Emerald maniacs- “Harleking” revisits a lot of their epic, mead hall strains with Thomas giving his melodies from the mountaintop.

You can’t go wrong with searing twin guitar harmony bursts within “Another Universe” or the arpeggio meets Middle Eastern instrumental work in closer “Wrath Of God” – Emerald should appeal mostly to those who live for the classic power metal style, keeping the theatrical elements down to a minimum and leaving the musicians in charge of providing the fireworks. Fine work gentlemen- keep the flame of metal alive!

BONDED BY BLOOD – The Aftermath