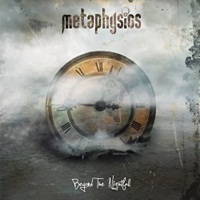 METAPHYSICS – Beyond The Nightfall

An aggressive progressive metal quintet from Italy, Metaphysics release their debut album “Beyond The Nightfall” almost seven years into their existence. A previous 4 song demo “Evolution” hit the streets in 2007, and as a result of a compilation appearance on the Italian version of Rock Hard magazine gained label interest – bringing you up to speed on their background. Recording “Beyond The Nightfall” in S.F. Studios with Simone Fiorletta (No Gravity, Moonlight Comedy) the band also gained a guest appearance from Labyrinth keyboardist Andrea De Paoli- but overall you can tell Metaphysics have a love for Symphony X, Superior and others who retain melodic sensibilities over their obvious musical prowess.

A Metaphysics arrangement can start off very subtly- a sparse electric guitar phrasing for “Lifend” that will build with marching drum movements and soon you find your head and feet animate with the transitions, the calmness one moment and turbulent riff/ tempo changes the next. Vocalist Davide Gabriele has a soothing high range, not operatic but more AOR or pop oriented- very similar to Terence Holler of Eldritch on songs such as the mid-tempo “Follow Your Desires” or harmony laden “Renaissance” that features some wild pitch bending keyboard solo antics. 51 minutes of action that doesn’t beat you over the head with technical wizard mechanics- these five musicians inject positive feelings and personality into the mix so you can gain a connection with these songs.

“Beyond The Nightfall” will not be a record that flies up the flagpole for best album of the year talks. Once Metaphysics knows how they want to take their hybrid riffing principles, hooks and melodies to a slightly more original level, I’m sure they will attain loads of festival offers from the visible promoters of progressive metal across the globe. Exploit the finesse and groove comfort zone from drummer Marco Aiello and I foresee a long, creatively fruitful career for Metaphysics.