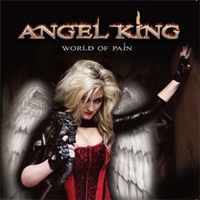 Discovering new music in hard rock and metal gives my brain fuel to live and my fingers thoughts to ruminate upon. Due to the nature of the business with technology allowing musicians to affordably record material we have so much new product hitting us weekly- and as a result it’s tough as a journalist to separate the good from the great (although it’s easier to trash what’s awful or unworthy). So when a newer act like Stockholm, Sweden’s Angel King release a debut album a year and a half into their formation, warning lights sound as I hope we aren’t going to witness a series of songwriting growing pains.

My fears quickly disappear once the opening keyboard strains subside and Jack Vegas’ powerful, exotic guitar lines take over on “Dangerous”- a perfect montage of classic UFO (circa “Lights Out”) with Axel Rudi Pell and including some beefy bass work from Rock Boston during the instrumental portions. “Living The Wild Life” possesses the best of European organ play and firm guitar ethics against a steady American hard rock drum groove and an addictive chorus harmony that I could hear audiences shouting back to the band easily at all their shows. As a singer Lazzy G uses his strength and power to give material like “Enemy” and the bluesy, King’s X-ish “Get Up” more of that Swedish good time personality and charm.

Melodic power metal fans and general hard rock mavens will both enjoy the arrangements, skill level of the musicians and the variety of songs on “World Of Pain”. Angel King love the work of Europe, Axel Rudi Pell, Leatherwolf, and others in that Rainbow family tree mold- so this could be a surprise release if you are seeking another exciting 10 song record.