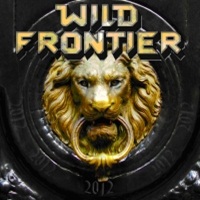 Fifth album from these veteran German hard rockers- starting in 1990 and clawing their way through the scene, Wild Frontier took their name from the fine 1987 Gary Moore album. “2012” comes six years after their last studio record “Bite The Bullet”- but this is my initial sojourn into the band’s songwriting and style. Overall the quintet play a familiar brand of melodic oriented hard rock- very driven through the guitar riff hooks and easy to ingest repetitive choruses. Some of the material is a little too poppy in the keyboard parts for my tastes (“Why Don’t You Save Me” the easiest song to pick out for its rhyme-like notation).

You can tell these guys love Gotthard, Gary Moore, and other acts oriented in that late 70’s to mid-90’s hard rock sound. The opening guitar run to “It’s All Up To You” is classic The Edge/ U2 oriented, and I prefer the up tempo “Tonight Tonight Tonight” that should charge up all audiences when this song hits from the stereo to the stage. Vocally Wild Frontier is stronger in the choruses than the verses, Jens Walkenhorst has a thin, slightly nasal quality that doesn’t quite match up to their heroes in the genre. The album ends on a cover note with Abba’s “Gimme Gimme Gimme” given a Wild Frontier makeover- obviously much more aggressive in the guitar department but the symphonic keyboard main flourish stays in your head for days.

There is an audience for this, the guitar work engages those who love traditional hard rock, but I don’t think Wild Frontier are anywhere near the caliber of Gotthard or The Poodles when it comes to this style. As such “2012” will only be an occasional playback instead of a consistent listen.