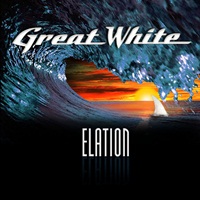 The soap opera antics in the 80’s hard rock scene seem to be getting out of hand when you have two versions of a band slugging it out in the marketplace. L.A. Guns has Traci Guns on one corner, and Phil Lewis/ Steven Riley parading another version due to a 50/50 ownership of the trademark. Now due to Jack Russell’s prolonged hospitalization, Great White moves on without him- taking in XYZ vocalist Terry Illous to front the group on their latest studio album “Elation”. It’s all water under the bridge though if the product stands the test of time- so let’s delve into these 13 songs and let our ears make the judgment call.

This is a surprisingly strong, blues based hard rock record with an old school traditional feel- taking the spirit of their 70’s influences and applying great songwriting hooks and instincts. “Love Train” has this slower, southern rock-styled riff crawl as Mark Kendall spits out a memorable solo and the harmonica parts accentuate the mood. “Hard To Say Goodbye” is a ballad in the Black Crowes mold, Terry channeling a little Paul Rodgers with his normal expressive range as Michael Lardie adds in the right amount of organ action to give the arrangement a gospel flavor. By the time you reach the swanky closer “Complicated”, you bask in the fact that rock ‘n roll is not merely a young man’s game anymore- and that Great White can move forward even if Jack Russell will no longer be fronting the group.

In the same caliber as Van Halen, Europe and UFO this year, “Elation” will quell most of the staunch GW rumors and hopefully the fans can benefit with two quality acts (aka Accept and U.D.O.) as a result. Who says upper tier songwriting ends in your early to late 30’s? Great White continues to age gracefully like the finest wines.