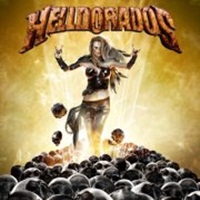 Given the Scandinavian sleaze metal explosion of recent lore, should it really be shocking to see German acts like Helldorados taking their shot at glory? Forming in 2009, the Stuttgart based quartet attempt to bridge the conventional, fun loving sleaze aspect with an injection of guitar power and drumming more familiar to traditional/ power metal followers on this debut 12 track album. Guns ‘N’ Roses circa “Patience” comes to mind on a more acoustic based, laid back outing like “Changes” – contrasting the more conventional, road racing power riffs in “You Live, You Learn, You Die” that recall early Hammerfall or latter day Edguy.

The rhythm section of Gunnar and Chris form a tight bass/ drum duo, willingly sticking to a 4/4 groove on “Shout” just as easily as laying down some speed chops on “Double Dealer”. Overall the musical feel is one of reckless abandon, cranking up your stereo to maximum level and having as good a time as possible. Guitarist Steve lays down serious delay effects in a bluesy way for a fine solo performance on “Torture”- both for the main spotlight as well as the underbelly through the closing chorus moments, then follows things up with a Van Halen-esque riff display on the appropriately named “Girls”. As a singer Pierre has a confident swagger in terms of his personal delivery, but I wouldn’t put his main melodies or ability in the upper tier of Sebastian Bach or David Coverdale land.

As a debut, “Helldorados” possesses potential in the band, but I wouldn’t say they are ready to lay acts like Hardcore Superstar or Reckless Love to waste. Maybe they need to get some more road work in them, understand how audiences react to material, and then come back with stronger hooks/ melodies for the follow up. For now, these Germans remain in my occasional to look at playlist.

THE FORSAKEN – Beyond Redemption