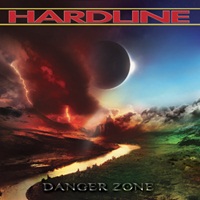 “Fever Dreams” opens with Alessandro’s simple yet effect AOR keyboard phrasing, the chorus seamless in blending the grace of Journey with the drama of Orion The Hunter. On the softer side “Stronger Than Me” features electronic percussion before plunging headlong into power ballad territory, Thorsten economical in his solo spotlight with sparse yet emotional note execution. Other songs reflect Johnny’s wide open musical palate through the years- “Stay” for instance has a lot in common with The Outfield, especially that driving guitar sound and the higher harmonies that make this song special, while “Look At You Now” has an acoustic meets electric groove not dissimilar to Third Eye Blind, the symphonic keyboards giving the arrangement a much more dramatic feel.

The upper echelon in the melodic hard rock/ AOR field knows how to capture the best in songwriting with performances that scream first class entertainment. “Danger Zone” and Hardline may not be the same act that hit the scene 20 years ago, but don’t discount their musical integrity and ability to create catchy, memorable songs. The world benefits doubly from the voice of Johnny Gioeli, and let’s hope a fifth studio recording will be in development soon.