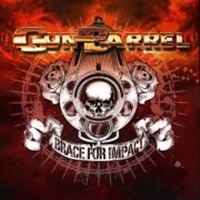 Fifth studio platter for the straight ahead power hard rock band Gun Barrel, who continually craft a balanced attack of addictive, groove laden street oriented music that favors Motorhead and Rose Tattoo fans and then inject some power elements with the guitar harmonies and double bass parts that appeal to the Judas Priest/ Primal Fear sect. New vocalist Patrick Suhl replaces the late Xavier Drexler who unexpectedly passed away in 2010, and I believe his naturally wider melodic range gives songs like the title track and the AC/DC-like “Start A Riot” more personality and catchiness than ever before.

Veteran groups know that an album can’t stay solidly stuck in one tempo or arrangement direction, so more boogie-oriented, up tempo efforts like “Diamond Bullets” and “Books Of Life” have the best design for hair whipping, fist banging entertainment value either at home or during live performances. There’s something regarding the harmonic background melodies within “Stand Your Ground” that appears to be a staple in German hard rock/ metal- the ones familiar at beer halls or soccer stadiums. The production appears to have a thicker guitar driven stance than their last outing “Outlaw Invasion”, even more noticeable on the closing “Big Taboo” which features a slightly sped up main riff to “The Zoo” from The Scorpions.

Gun Barrel is another quartet not out to change the music movement with their style of songwriting and performances. They like what they know, playing admirably within those parameters, and as a result cook up an album’s worth of catchy tracks that should go down a storm with the aforementioned old school maniacs. The long wait is well worth it, “Brace For Impact” lives up to its title.