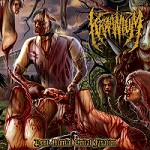 Ultra brutal death metal (ala Devourment) is not something we Norwegians are particularly known for. The slam death metal form hails back to the early US east coast scene (Pyrexia, Suffocation) and is actually not very alike neither the Florida or the early Stockholm sound.The Sickening from Kristiansund released a brutal masterpiece back in 2009 ("Death Devestation Decay") but since then is has been not much from that end of the metal specter (on semi major labels at least).

It’s therefore with great pleasure to receive a new release from Oslo’s Kraanium (now signed to Comatose Music with names like Bloodsoaked and Mutilated in their rooster). The five piece started out back in 2001 but went on hiatus from 2002-2006 before releasing their debut "Ten Acts of Sickening Perversity" in 2008."Post Mortal Coital Fixation" is their third full-length and this is some really brutal extreme metal. Between its massive wall of distorted guitars and blast beats you have a guttural vocal so low that its just over the floor. The lyrical theme is of course centered around splatter & gore but you’ll need the lyric sheet do decipher what Mr Martin Funderud is spitting out. I really dig the vocal, its perfect for their sound. The production is pretty clean and I really like the sound of the drums. The hollow snare drum matches well with the low vocal like a fist in a glove.The songs are arranged in an easy to follow manner and the weird obscure samples in between really gives the whole album a gory overall impression. "Post Mortal Coital Fixation" is a overall very good release and even after a couple of spins its still not boring or monotone. And that says a lot because this ultra brutal death metal form often calls for a break after a couple of listens. Looking forward to catch these guys live.

STRENGTH APPROACH – With or Without You