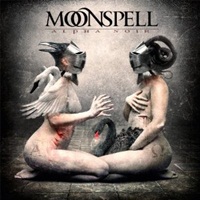 Portugal’s biggest export to the dark/ gothic/ underground metal community is probably Moonspell. Their sound and style never stagnate- pushing the boundaries within their own songwriting and probably challenging their long standing followers in terms of what they expect out of this band. Having the good fortune to follow Moonspell from their more intense, black metal meets gothic strains with their “Wolfheart” debut in 1995, they’ve shifted back and forth into more experimental gothic lands with “Sin/Pecado” and “The Butterfly Effect” or heavier terrain with “Memorial”. On album number nine “Alpha Noir”, the five piece reach back into their collective metal roots with this selection of 9 songs that are emotionally razor sharp, intense when called for but also atmospheric and brooding when necessary.

The keyboards for instance in a rhythmically driven track like “Em Nome Do Medo” give the music a clash of the choir/ funeral titans, while the follow up “Opera Carne” conveys some of their most jack hammer precise riffs to date- living up to the Metallica and Artillery influences they speak about in their bio information. Fernando Ribeiro digs deep into his larynx for more of his youthful angst and spitfire venomous delivery on such highlights as the King Diamond-esque “Grandstand” and the slightly disco sounding “Versus”. Those who clamor for a heavier, guitar oriented Moonspell will be thrilled with the Ricardo Amorim and Pedro Paixao riff/ solo teamwork, as they aren’t afraid to pop in accelerated solos or down picking to keep the atmosphere purely on the metal side.

“Alpha Noir” could reach the old school audience who felt Moonspell went too far left of their comfortable niche space. I for one appreciate the emphasis on streamlined songwriting, relying more on the instrumentation at hand and less about extraneous grandiose secondary sound waves. Who says veterans can’t release their best records 20 years into plying their craft?