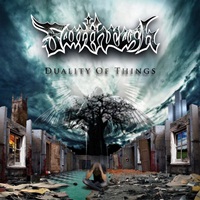 Polish thrash with occasional nods to some industrial influences on this debut album “Duality Of Things”. Originating in March of 1986 by then 18 year old guitarist Grezegorz Obroslak, bassist Mariusz Ostep and vocalist Less remain from those early days. The first incarnation of Fanthrash recorded a series of studio and live demos plus performed wherever they could in Eastern Poland until life commitments cause the group to disband in 1992. Starting again in 2007, an EP release in 2010 helped the band finally secure a record deal to release a 12 track full length.

The newest members of Fanthrash are lead guitarist Wojciech Pilat and drummer Radek Grygiel- and this quintet seem content to write and play a slightly progressive form of mid-tempo oriented thrash, using influences from Believer to Fear Factory and Sepultura on songs like “Allocation Of The Soul”, the stair step riff showcase “Forced” as well as the bass heavy title cut. Less as a vocalist keeps things simple- cleaner for the chorus in “Green Tattoo” he has a similar scream propensity as Max Calavera during the late 80’s Sepultura albums. The band will also throw in some off kilter chops parts, such as the instrumental “Lizard Skeleton” which is more of a progressive jazzy effort where the rhythm section really push their skills to the limit.

“Duality Of Things” has a lot of harmonic solos and dual guitar riffs that gain some excitement- the major problem being there aren’t enough hooks in the vocals or main songwriting to really put this in the essential must have category compared to many of the latest German or North American releases. The first half of the record flows a little better than the varied second half, so I’m hoping Fanthrash can smooth things out next time.

HAVOK – Point of no Return (EP)