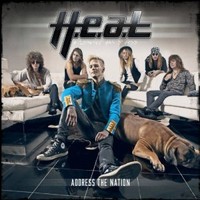 Bringing the glorious melodic rock of the 80’s into modern times, Sweden’s H.E.A.T lost singer Kenny Leckremo in 2010 following their second album “Freedom Rock”. Quickly picking up Erik Gronwall in August of that same year, the former Swedish Idol winner lost no momentum in front of live audiences and soon the test of singing on the band’s crucial third album “Address The Nation” would take place. Does the band have what it takes to continual impress with its non-stop melodic hooks, catchy guitar riffing and keyboard parts, steady as steel bass and drum foundation- all topped off with the persistent vocal harmonies driven home by the powerhouse singer slot?

This 10 song effort once again proves that the sextet know how to craft incessant melodic rock / AOR that combines the majesty of Giant, the sheer fun element of bands like Loverboy and Def Leppard and the ever-present classic Europe base to make you crank the whole album at top volume. “Breaking The Silence” opens in mid-tempo anthem style, a future set highlight driven by Erik’s passionate multi-octave delivery and a guitar hook right in line with “Lovin’ Every Minute Of It”. Jona Lee’s bright keyboard riffing drives the mid-tempo follow up “Living On The Run”- the changes pulsate like a steady heart beat and this would have easily been a rock radio staple back when the style was king complete with a paint melting guitar salvo from Eric Rivers. “The One And Only” will be the ballad females crave to hold them through their relationship woes, while “Better Off Alone” re-lives the glory mid 80’s when “The Final Countdown” –era of Europe gave that generation a shot in the arm to create great catchy melodic rock/ metal songs.

With vocal harmonies Mutt Lange could be proud of, top to bottom “Address The Nation” can translate very well from a party atmosphere in the home to a celebration in front of thousands on tour. Swinging with Texas blues swagger on “It’s All About Tonight” or adding a little saxophone touch for the softer “In And Out Of Trouble” proves H.E.A.T are willing to stretch outside their comfort zone, and make this work in their overall songwriting goals. The slick production values top off all one could expect from H.E.A.T- the studio the perfect laboratory to hone in their creative juices to age like the best fine wines.

In a just world, “Address The Nation” would spend multiple weeks at the top of the charts, guaranteeing sold out arena scale audiences everywhere they go. Timeless- AOR will never die provided acts like H.E.A.T churn out albums like this.

FUELED BY FIRE – Plunging Into Darkness