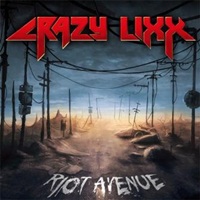 This third album from Sweden’s Crazy Lixx appears to contain 11 songs with a leaner, rawer approach than 2010’s “New Religion” effort. Self-produced and featuring three main members (Danny Dixon-vocals, Andy Dawson and Edd Liam on guitars) plus the studio rhythm section of Loke Rivano on bass and Joel Cirera on drums, “Riot Avenue” has much more in common with Aerosmith, Dokken and Kix on this album than the more edgier Guns N Roses/ LA Guns stomp of their fellow Swede sleaze brethren.

Opening with the straight forward bar boogie “Whiskey Tango Foxtrot”, a lot of the material is quite rudimentary in its mid-tempo stance and I don’t really find much to hoop up in excitement as the riffing drags and songs like “Fire It Up” or “Church Of Rock” could be cutting room floor filler offerings from the late 80’s scene. Danny Dixon still excels in his melodies and the Def Leppard style multi-part chorus harmonies are an essential part of the Crazy Lixx sound, it’s just obvious that “Riot Avenue” could have benefited from an ace producer to give another outside ear perspective for the better benefit of the final product.

By the time the 6:33 closing ballad “Only The Dead Know” fades it’s final drum beat and guitar line away, I’m not inclined to give “Riot Avenue” a return airplay that quickly. Dynazty may eclipse Crazy Lixx in popularity for the year based on their latest release. In the meantime, I’ll savor “New Religion” and push this one to the back.