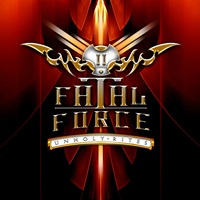 Guitarist Torben Enevoldsen certainly has a lot of music within his mind to put out to the world. Instrumental solo albums as well as band offerings with progressive metal’s Section A, the melodic metallers Decoy, and this melodic hard rock oriented act Fatal Force. The first self-titled album released in 2006 featured Mats Leven (ex-Yngwie, ex-Therion) on vocals and Daniel Flores on drums, but there appeared to be little hope for a second record as the years moved forward. By 2009 Torben needed to assemble a new lineup as coordinating the right schedules for studio time wasn’t possible- enter well renowned power singer Michael Vescera (Obsession, Loudness, Yngwie), as well as new drummer Dennis Hansen and the results finally hit the streets with the 10 song “Unholy Rites”.

When you have an experienced songwriter and instrumentalist like Torben, who plays guitar, bass and keyboards on this album, pairing him up with Michael Vescera gives songs like “Run For Cover” or the shimmering, mid-tempo harmony laden “No One Will Listen” serious credibility in the melodic metal scene. Torben keeps the riffing simpler and streamlined, giving a heavier AOR-Toto touch to the main parts of a song like “In Silence” and then exploring Criss Oliva/ early Savatage territory on “Higher Ground” where Dennis gets the chance to propel the arrangement with a little bit of his double bass skills. I think Fatal Force gives Torben the chance to balance his obvious power and melodic metal knowledge with a darker, heavier tone- and Michael shines with his multi-octave range to make the title track and “Higher Ground” instant toe tapping, head banging highlights.

With recordings taking place between Michael’s home studio in Nashville, TN plus Torben’s studio in Denmark, “Unholy Rites” will be essential for those who love the 70’s and 80’s guitar hero/ powerhouse singer delivery- something German acts like Axel Rudi Pell and At Vance make their bread and butter style. Two thumbs up from me!