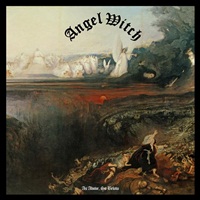 One of the most infamous NWOBHM albums that fans and critics love but never achieved proper sales numbers would be the 1980 self-titled debut from Angel Witch. Songs like “White Witch” and “Gorgon” have this evil edge matching up with occult lyrics and searing riffs that would live in your brain forever. Kevin Heybourne struggled to match the legacy of said record in the follow ups, then attempting to gain favor in America he faced numerous lineup struggles (and passport issues) that would not see a new studio record hit the streets until now- 26 years after 1986’s “Frontal Assault”.

“As Above, So Below” proves as a guitarist/ vocalist and songwriter that Mr. Heybourne , along with bassist Will Palmer and drummer Andy Prestridge aren’t ready to rest on the laurels of the past- creating a fusion of traditional metal with doom overtones that retains a classic framework. Even when the band perform at a semi-ballad tempo like the one within “The Horla”, there’s this haunting atmosphere pervading the drum rolls, lower bass parts, organ nuances and the scintillating guitar parts that conjures up David Wayne-era Metal Church circa “Watch The Children Pray” against the larger than life sound of Black Sabbath. All of the tracks clock in at 5-7 minutes, and most are of a mid-tempo pacing- although there is a racing gallop to one of the instant favorites “Witching Hour” where Kevin reaches the upper end of his vocal register.

Innovators in metal know how to orchestrate undeniable hooks and melodies in such a way to make every listener’s hair stand at attention and provoke emotional or physical reaction. With Angel Witch’s fourth album “As Above, So Below”, this could turn a new generation onto the mastery of NWOBHM- a style that never dies in the hearts of metal heads worldwide.