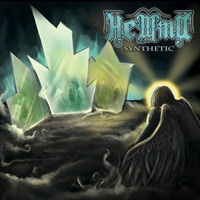 Ever since hearing my first strains of Rush back in the early 1980’s, I’ve been following progressive rock and metal incessantly. What once seemed relegated to North America and the UK quickly spread to all four corners of the globe- and a hotspot for progressive metal over the past few years is Australia. Vanishing Point, Black Majesty, and Voyager represent three of the Down Under acts making an impact through record deals and touring/ festival appearances- and Hemina could be the next big sensation based on this debut “Synthetic” album.

An 11 song, close to 80 minute concept record about an angel forced to live through our modern world and beyond, the five piece leave no sonic stone unturned as far as harmonies, dynamics, challenging the mind with furious instrumentation one moment and then settling into quieter, Genesis meets Pink Floyd atmospheric bliss over the next passage. Hemina musically have their heart in the right place, as Dream Theater, Pain Of Salvation, and their fellow compatriots Voyager are good reference points. Guitarist Douglas Skene handles the lead vocals with the grace and power of all the best in the business- Ray Alder would be proud to have him as a stand in if necessary based on his work through highlights like “And Now To Find A Friend” and the introspective, outer world follow up “Hunting Is For Women”.

Keyboardist Phill Eltakchi doesn’t play second fiddle within the Hemina sonic landscape- he adds layers of swirling chords against his normal piano duties. Guitarist Mitch Coull, bassist Jessica Martin, and drummer Mathew Irsak all propel the sound of the band in its roller coaster manner- sometimes harsh, often fierce, yet with a beautiful chemistry to pull off some harmonic hooks that dazzle the ears for “The Boy Is Dead” and “Even In Heaven”. Three of the songs carry over the 11 minute mark- so those expecting a streamlined progressive metal experience are well advised that Hemina prefer sprawling arrangements of exploration.

One of the rare instances where I didn’t feel that a band could have compressed their musical thoughts to make a shorter record, “Synthetic” will be a record talked about in this fervent community for quite some time.