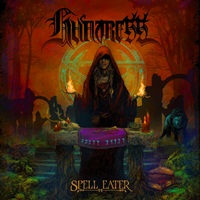 California traditional metal quintet Huntress may possess one of the more charismatic, evil female singers in the business with Jill Janus. Her opera touring as a teenager gives their debut album “Spell Eater” a Dr. Jekyll and Mr. Hyde persona- with some songs soaring to the heavens and others possessing this twisted scream charm as if Leather Leone, Anne Boleyn, and Karyn Crisis duke things out in a steel cage vocal match.

The lineup includes ex-Skeltonwitch bassist Eric Harris, ex-DarkBlack drummer Carl Wierzbicky and Professor guitar duo Blake Meahl and Ian Alden- so understand that musically this is a heavier form of traditional metal- influences come up like Savatage, Iced Earth and King Diamond all the way through to death and black metal – the latter two most evident on some of the guitar runs within “Aradia”. “Eight Of Swords” opens with one of those paint melting roars as the guitars chug with a militant march- hopefully a permanent mainstay in the Huntress live set list. The title cut allows Jill a chance to navigate all facets of her low to high operatic training- while Blake carefully crafts a solo that would make Jeff Waters and Andy LaRocque worshippers grin from ear to ear.

Overall I think Huntress has the instrumental knowledge to appeal to many of the new breed who are looking for this thick melodic groove against the down-tuned metal- as some of the riffing within “Snow Witch” and “Children” has this Goatwhore-like intensity that should give the band cross-generational audience potential. At 42 minutes the quintet could bring the American traditional metal scene back on the map- proving that with hard work, passion and a master plan integrity for the cause will win out over all.