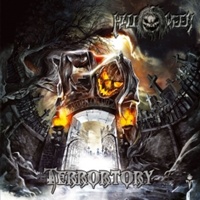 Detroit’s traditional horror metal act Halloween still slug it out in their own self-defined way with this new album “Terrortory”. Vocalist Brian Thomas and bassist George Neal have been around since their 1983 formation, with the current lineup including drummer Rob Brug and guitarists Don Guerrier and Donny Allen. Amidst re-releases by distributor Pure Steel Records of their back catalog, we finally get a new studio album, their first in six years.

As such, this 16 track/ 72 minute effort has a lot in common with early Savatage in terms of the dark, traditional riffs and simplified rhythm patterns. In fact a similar doom-like overtone pervades the title cut and “Her Ghost Came Out To Play” while there’s a nice galloping pace to “Scare You” with trailing/ echoing vocals from Brian that add to the effectiveness of this particular track. My interest in songs like “I Lie Awake” or “Say Your Prayers” sags because there is just too much to take in with 16 tracks and all of this is not top notch mandatory listening, even for the long-time Halloween fans.

The snare tone also will drive many mad- it’s got this low synthetic snap that is much more hollow than one would expect from a veteran band. Halloween for me has always been just as much about the visual stage show and performance as they have been about their horror metal sound- so as a result “Terrortory” isn’t their best record to date but it’s not going to alienate their cult appeal. Those of you in love with the 80’s American traditional metal scene should like Halloween.