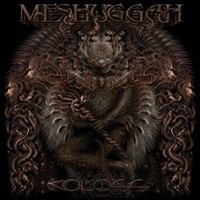 Djent metal, math metal- two terms synonymous with this Swedish act, especially since their “None” EP release back in 1994 which followed their more thrash oriented debut album of 1991”Contradictions Collapse”. Through the years the group continues to challenge themselves and their fans- experimenting with quieter sounds, electronic programming elements and harsher tones, while still maintaining their Meshuggah technical minded philosophy.

Album number seven “Koloss” comes four years after “ObZen”, which for many followers would be a return to basics in a more 4/4 drum pattern, mid-tempo framework. It appears with “Koloss” the five piece are honing in on keeping the drumming slightly simpler while varying the tempo pacing- but do not fear as the guitar parts still dazzle in their off-time mannerisms as Jens Kidman still tears your brain out with his equally unique rhythmic caustic screams. “Break Those Bones Whose Sinews Gave It Motion” is a close to 7 minute exercise in creating multi-layered tension through this eerie discordant guitar line against the slower drum movement as the rhythms just bounce to and fro in a seductive, hypnotic doom and gloom trance. “I Am Collosus” would be Jens’ word tour de force, his delivery stinging with how he draws out certain phrases and words to chilling effect. And those who love the Allan Holdsworth/ mesmerizing jazz solos from Fredrik Thordendal will find comfort in the numerous displays within “Marrow”.

Faster songs like “The Hurt That Finds You First” and “The Demon’s Name Is Surveillance” appear to be the ones most long time Meshuggah maniacs will gravitate to- but even the oddball closer “The Last Vigil” with its slower, brooding instrumental soundtrack appeal signals the creative tank is not idling in cruise control for this veteran act. Comparatively speaking against the greatness of Meshuggah’s discography, I would say “Koloss” could be the next logical step from “Destroy Erase Improve” meets “Nothing”- which means plenty to enjoy for all math metal fans.