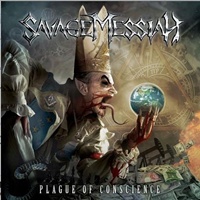 While there’s been an obvious second generation thrash explosion in North America, we must not forget other international countries leading their own charge. Savage Messiah hail from the United Kingdom- an area where newer bands like Evile and Gama Bomb sit side by side along with the old guard like Onslaught to keep the scene pumping with lifeblood. “Plague Of Conscience” is their second album and making the move from Candlelight Records to Earache should bolster their profile, especially if what the label has been able to do for Evile says anything.

If Evile are comparable to early Metallica and Slayer, then Savage Messiah certainly have similarity to Megadeth and Heathen in terms of their double guitar riffs, counterpoint rhythms, and blitzing, semi-technical soloing style. Vocalist/ guitarist David Silver possesses a potent set of in key pipes, almost a montage of Coburn Pharr (Omen/ Annihilator) and Dave Mustaine that keeps songs like “Six Feet Under The Gun” and “Architects Of Fear” at the forefront of my brain bank. The choppy riffs and variant tempo changes make the Annihilator-like “Carnival Of Souls” one of the record’s many highlights, especially due to drummer Mauricio Chamucero’s fluid metal chops and lightning fast fill work. They even have commercial leaning numbers such as the mid-tempo head shaker “In Thought Alone” that wouldn’t be far off from “Operation: Mindcrime” era Queensryche melding with 1990’s Flotsam And Jetsam.

Savage Messiah make a monumental leap in all aspects- songwriting, production, and creativity- with “Plague Of Conscience” compared to their last album “Insurrection Rising”. These musicians prove that the best thrash music doesn’t rely on mere speed and energy to get its message across- that it’s necessary to develop arrangements and songs with memorable hooks and melodies across dynamic tempos.

To those who’ve already downloaded the album (a move made by the band, noteworthy in this digital times)- let’s see these gentlemen when they tour your city or country, because Savage Messiah could eclipse much of the new breed in popularity based on this output.