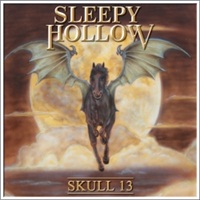 The New Jersey power/doom metal band Sleepy Hollow returns with their latest studio album “Skull 13”. Vocalist Bob Mitchell has been involved in the metal scene for over 30 years, and he’s joined by new bassist Alan D’Angelo (former bassist Steve Brink plays on the record), and longtime members Tom Wassman on drums and Steve Stegg on guitar. Their first album in 21 years, “Skull 13” contains 11 songs and almost an hour of music, keeping in the classic mold they started with on their self-titled debut.

The foundation of Sleepy Hollow’s sound is the Tony Iommi-like down tuned chord progressions from Steve Stegg and the high pitched power voice emanating from Bob Mitchell, very much in the vein of Dio era Black Sabbath or early Savatage for comparison sake. Not everything the band plays is at plodding half time speed- the faster “Rear Window” is an instant highlight for its NWOBHM main riff that combines Saxon motorcycle swagger with Iron Maiden-ish swing. The follow up “Inquisition” batters the brain with its monstrous Sabbath meets Metal Church groove and Bob exercising more of his lower range.

The songs vary from the spooky 2:04 instrumental “Misery Waltz” to the almost 10 minute “Epic (The Legend Retold)” with its echoing guitar overtones and theatrical, horror-themed story line. My two major criticisms with “Skull 13” lie at the hands of production value and occasional vocal hysteria. The distorted guitar tone and bass drums being buried in the mix tells me this was not a big budget affair- a shame as the songwriting would stand up tenfold with a proper producer behind the boards. When it comes to certain melodies and phrasing in songs like “Facemelter” and “Black Passage”, Bob mirrors the riff a little too closely- drawing out sounds at the end of verses where you want to scream in agony.

Maybe I need more time with this album. “Skull 13” has all the ingredients for a power/doom metal record most will desire- I just think an outside set of ears to reign the band in would have paid more dividends for the total concept.