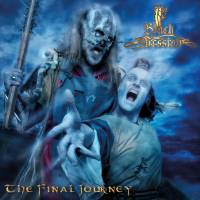 Pagan/ Viking metal would not be one of my favorite genres in the world, but one can’t deny its impact on the underground over the past few years. German sextet Black Messiah have quite a divergent sound on their fifth album “The Final Journey”- incorporating German language tracks at times into this musical stew of black metal with pagan/ folk parts and use of the violin that can be as classical as it can be southern country.

Take “Der Ring mit dem Kreuz”- Zagan’s vocals run the gamut from caustic paint melting screams to almost folk-like while his violin play moves from neo-classical runs to almost Charlie Daniels-like in his solo parts. “Into The Unfathomed Tower” is a shorter 3:18 instrumental arrangement that serves as a tribute to one of the best doom metal bands of all time in Candlemass, slightly faster than any song in this band’s discography but you can hear the spirit of this classic act in the riffing and finesse of the instrumentation.

Brooh’s drum patterns get very monotonous by track 5 “Feld der Ehre”- especially when he lays down the double bass that almost sounds computer driven rather than human driven.  I prefer when the band explore more of the King Diamond influences on a track like “Lindisfarne” where the keyboards and guitars create a slightly horror laden motif in the transitions against the otherwise conventional black metal riffing and rhythm pattern.

Ultimately Black Messiah must be doing something right to be on their fifth album- “The Final Journey” to me is adequate in its fierceness but I don’t really sense much to retain even after repeated exposures. Probably a better act to catch with all the requisite gear and imagery in a live setting.