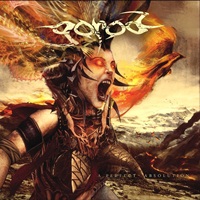 Something in the French waters seems to allow heavier, technical-oriented death and progressive metal bands to be sprouting their wares across the global scene. Forming in 1997 under the moniker Gorgasm, the French five-piece modified their name in 2005 to Gorod following the release of their debut album “Neurotripsicks”. “A Perfect Absolution” as their fourth full length is another dazzling display of dexterity, progression, and pushing technical death metal to its limits while honing the arrangements and riffs into some form of cohesive, palatable structure. You see, all the dizzying off to the races harmonics and tempo changes mean nothing if your ears can’t catch what blurs by you in mere minutes.

“Sailing Into The Earth” for instance may open into a thrash meets blast beat riff chase, but soon the high neck dual guitar harmonies and slower, pit-inducing parts take over and you feel your heart beat burst out of your chest wondering where the musicians and caustic vocal action will take you next. Drummer Samuel Santiago must lose severe water weight as he moves his arms and legs often at different pacing, navigating the thrash and death playbook for monster efforts in “The Axe Of God” and the slightly off center “Varangian Paradise” with its slightly funky opening and more straightforward, traditional main verse play. Lyrically the album takes on the tenth century history of Kiev Rus and the battle of redemption when its king Igor died in 945 and his widow Olga vowed revenge for his untimely demise- and I applaud Gorod for not taking the normal gore/ guts approach and tackling some intelligent perspective for listeners to learn from.

Bottom line when it comes to “A Perfect Absolution”? This one contains enough for the schooled maniacs to savor and also deliver plenty of bodily harm in the pit. Those into Obscura, Atheist, older Cynic,Coroner and plain old progressive death metal need Gorod in your life.