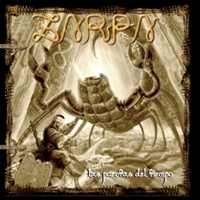 The Spanish traditional heavy metal band Zarpa have been plugging away off and on in the scene since 1977- releasing seven studio albums in the process. Their latest “Las Puertas Del Tiempo” is a 14 song, 65 minute plus excursion into the lands of late 70’s to mid 80’s heavy metal, with stirring riffs and persistent double bass plus high pitched vocals that fits well with fans of Judas Priest and Accept.

Imagine a lot of furious head banging and synchronized stage moves to material like “Esto Es Heavy Metal” and the thunderous percussion within the title track- while guitarist Vincente Feijoo projects his vocals in an epic, Manilla Road meets Rainbow (circa Graham Bonnet) manner. When the band expand on their thoughts, such as the 7:09 “Trovador/ Trovador Electrico”, they incorporate folk instrumentation for the introduction and then church organ movements against some slower dual guitar harmonies which gives the song an old school warrior appeal. Later Zarpa experiment with more of a slower building, emotional song like “En Soledad” where acoustic soloing and thicker, orchestral keyboard/ piano parts gives the listener a deeper, reflective side of the band- something worth pushing on future recordings to counterbalance the straight ahead offerings.

Tierra Santa may be the most prominently known Spanish language traditional metal act, but I believe there’s enough room for more acts in the genre and Zarpa come from more of an early British and German songwriting standpoint than Tierra Santa’s Iron Maiden affinity. Those of you into Accept, U.D.O., and possibly “Painkiller” era Judas Priest will find plenty to delight in Zarpa’s arsenal of riffs, soloing, and sounds.

Good showing from a veteran quartet.