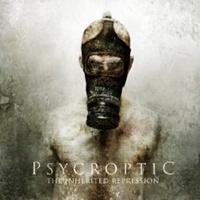 Australia’s Psycroptic have been creating technical death metal since their 1999 inception, releasing four albums over their career and gaining the chance to tour the globe- with 250 shows alone in support of 2008’s “(OB)SERVANT” taking them into China, Inner Mongolia, Indonesia, and New Zealand beyond the conventional North America, European, and Australian markets. “The Inherited Repression” is my first sonic sojourn into the group- and it’s clear to see why their appeal stretches to all corners of the globe.

The songwriting fluctuates between dazzling displays of faster fluidity and more controlled grooves, with the emphasis being on the creation of distinct moods and hooks. Jason Peppiatt possesses a dual acidic roar and faster, more frantic screaming vocal delivery through songs like “Deprivation” and “Euphorinasia”. Joe Haley’s guitar work makes Psycroptic the technical death metal pioneers they are- his stop/starts, the crazy up and down the ladder riffs and licks (check out “The Throne Of Kings” for this illustration) and his sense of timing truly put him the elite class of axe masters. The rhythm section of bassist Cameron Grant and drummer Dave Haley up the challenge by fluctuating between intense blasting sections and then brilliant groovier parts while not sounding like a bullet train disengaged from its tracks. Not many bands can make all the tempo transitions work on “Unmasking The Traitors”, but Psycroptic accomplish what they set out to do with their marriage of musicianship and songwriting bliss.

The best technical death metal albums pack everything they can muster into 45 minutes so you’ll take years to detect, discover and dissect every dynamic crack of this recording. Psycroptic go one step further in the hopes of not just appealing to the theory minded crowd, but also the wider cross section of metal appreciators by keeping the material flowing in mostly 4-5 minute constructs.

BLESSED BY A BROKEN HEART – Feel the Power