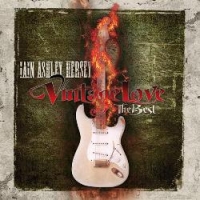 This 15 song album is a compilation of guitarist Iain Ashley Hersey’s work from 1999-2008, consisting of various cuts from his 3 studio albums and closing with an unreleased track “Red Head Rampage”. Rounding out the lineups with some of the best melodic hard rock bassists, drummers and keyboardists in the business, you’ll get to hear some high class singing from the likes of Paul Shortino, Graham Bonnet, Carsten Schulz, and Doogie White among others.

Iain grew up in New England and studied at the Berklee College of Music, but his influences come from the UK blues/hard rock players of his youth, as you can hear elements of Eric Clapton, Ritchie Blackmore, Uli Jon Roth, and Gary Moore in many of his riffs and solos. I especially enjoyed his fluid note wrenching work on more epic numbers like “Distant Memories” or “Blood Of Kings” where you can just hear the various pain and pleasure emotions coming through his brain and fingers into the fret board.

When done correctly, there’s nothing quite like the symbiosis between a strong set of rock vocals and an equally incendiary guitar compliment. “Walking The Talk” features the blood vessel bursting melodies from Graham Bonnet along with a slinky keyboard/guitar tradeoff arrangement that mirrors the best 70’s Deep Purple with Graham’s time in Rainbow. “Voodoo Spirits” opens with an accordion-like carnival movement before sliding along with this mid-tempo, bar boogie sound, as Carsten’s melodies slither like the best Coverdale or Plant times.

Hopefully thanks to the recent upswing in fan appeal to bands like Black Country Communion or Voodoo Circle, “Vintage Love- Best Of” should receive more than a passing interest in the classic rock community.

THRALL – Vermin To The Earth