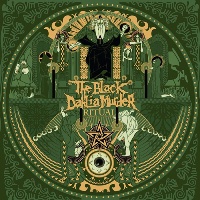 Few bands have been more consistent in their album quality than The Black Dahlia Murder. Some might criticize the bands repetitiveness throughout their records, but this is also a band that you either love or hate. Personally I regard The Black Dahlia Murder to be a metal phenomenon. Their style is uniquely distinctive and they continue to perfect it on every record. There are few bands that can claim to have their own unique sound, but when Black Dahlia is put on there are never any doubts as to who are playing. They have created their own genre so to speak, placed perfectly in between metalcore and deathcore. The latest addition to the discography is called Ritual, and it is possibly their best album to date. (I might put Nocturnal ahead of Ritual, but they are pretty damn equal.)

The first noticeable thing about Ritual is that Black Dahlia tries to expand their formula by presenting their most varied album to date. Tracks like “On Stirring Seas of Salted Blood” and “Malenchanments of the Necrosphere” shows the band from a darker side, clearly underlining their inspirations from old school death metal. “Den of the Picquerist”, on the other hand, has a more hardcore/punk feel to it. Though these variations are well executed, it is when Black Dahlia venture into well known territories that Ritual really shines. “Moonlight Equilibrium”, “The Window” and “The Grave Robber’s Work” are all tracks that range within the bands best compositions ever.

The three above mentioned tracks also exemplify why the lovers of Black Dahlia are as loyal a horde of fans as can be found. What ultimately is so captivating with the band is their intensity, the flawless technical musicianship and the maniacal blend of black metal screams and death metal grunts. Couple all of this with some off the hook guitar solo performances and you have the making of their devoted fans’ wettest dream.

I believe the haters either misunderstands or haven’t really given this band a proper chance. The development of their own style borders on the ingenious, in a nerdy sense of the word that is. Cause the technical finesse of Black Dahlia is truly a nerd’s pleasure. Still, the melodic content is just accessible enough to make this the technical insanity accessible. Black Dahlia should apply to fans of melodic death, Gothenburg death metal as well as fans of technical death metal and progressive extreme metal. If you’ve missed this band, or if the time is due to give them another chance, Ritual is the perfect place to begin. Get with the program and join the Black Dahlia fan club. Ritual is just pure fun and metal madness from the get go.