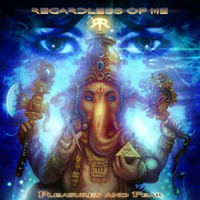 REGARDLESS OF ME – Pleasures and Fear

Regardless Of Me definitely has their own thing going on. Their music is labeled as “melodic progressive trip hop death” on their myspace page. Basically this is melodeath with some tech aspects and female vocals. I hear influences from Dark Tranquility, Evanescence and Meshuggah on “Pleasures and Fear”, and it kind of works too.

Evanescence is only mentioned because the female vocals are very similar. The music has nothing in common with Evanescence what so ever. As far as the music and growls go, the melodic content reminds me of Dark Tranquility around “Projector”. Especially the DT hit “Undo Control” is brought to mind by Regardless of Me.

When the songs turn more towards the technical side, the riffing is somewhat Meshuggah-esque. The mix of these elements compose the entity that is Regardless of Me. They have their own thing going, both in song structure and production. At times it brings The Project Hate to mind, if only for a short while.

I am quite enjoying myself when I put this album on. I do catch myself growing tired of the melodies rather quickly though, so I can’t promise that this is an album with long life expectancy. It might be for some, but I could wish for even more memorable melodies. “The Way you Are” and “Made of Steel” are my personal favorites. They are the more straight forward songs on the album, but I can’t help finding these the most engaging also.

“Pleasures and Fear” is solid stuff from A to Z. It just misses that little extra spark that would send me spinning into sonic euphoria. Regardless of Me is still early in their career though. This only being their second album, I see no reason why they won’t develop into an even better band. They are definitely moving in the right direction.

ILLNATH – Third Act in the Theatre of Madness