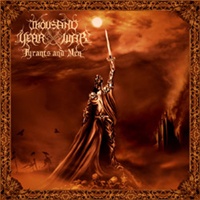 Alaska may be one of the last places in the world you would think a melodic death metal band would reside, but for guitarist/vocalist Hiram Lohr, this is where he calls home. Recruiting session musicians to fill out his musical visions with bassist Kellen and drummer Fredrik Widigs, “Tyrants And Men” as a debut 10 song full length has a lot more in common with the European movement than anything remotely North American.

Hiram’s vocals are a blend of the deep bellows from below along with blackened sandpaper-ish screams – which will surely bring to mind artists like Amon Amarth, Hypocrisy, and Dissection on songs like “No Gods, No Masters” and the slower militant marching “Warriors Of Defiance”. The riffing and soloing carries the bulk of the melody enhancement for the group, often with those striking speed note picking notations that can be a tad folk-like during the slower sections. The bulk of “One Final Breath” gives Fredrik the ability to move from super blasting double bass to more controllable drum motions that will certainly induce head banging and air drumming maneuvers. There’s even a hint of thrash mastery in “Open Casket” as the main stair step guitar parts recall “Over The Wall” from Testament if played at double speed.

Lyrically tackling a good versus evil perspective, and often evoking historical/ mythological topics to flesh out the thoughts such as in one of the stronger tracks “Spartacus”, Thousand Year War can develop this niche to keep themselves away from the conventional gore/death material that’s been prevalent in this scene. Overall “Tyrants And Men” gets the job done if you are a melodic death metal fan- as long as you understand there isn’t a clean vocal passage in clear ear shot.

JONATHAN DAVIS AND THE SFA – Live at the Union Chapel

BEEHLER – Messages to the Dead