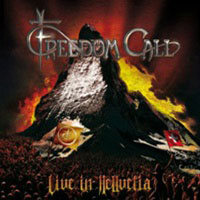 Interesting times in German power metal band Freedom Call these days. One of the two main members of the band, drummer Dan Zimmermann, left shortly after the release of their sixth and latest studio album “Legend Of The Shadowking” to concentrate fully on Gamma Ray- leaving vocalist/guitarist Chris Bay to replace him with Klaus Sperling (ex-Primal Fear). Seven years and three studio albums beyond their first live recording “Live Invasion” in 2004, this double live, 19 song plus drum solo effort showcases the happy choruses and speed we’ve come to know and love in front of an enthusiastic Swiss audience during late December 2010.

To those ardent followers of this band, be forewarned as 7 of the 19 main songs also appeared on that previous live album- which can be viewed as a testament to the staying power of those early Freedom Call songs (“We Are One”, “Metal Invasion”, “The Quest”, and “Freedom Call” among the best in the band’s catalog). Do not fear though, you’ll also get 6 tracks from the latest studio record, including the two part “Merlin” saga and more mid-tempo, mead hall marching material like “Tears Of Babylon” and Irish electric guitar melody infusion through “A Perfect Day”.

Throughout the concert, the audience almost sings as loud as the P.A. system the band employs- and Chris speaks to the crowd in their native Swiss tongue which I’m sure goes far to endear Freedom Call to the country. Overall this is an adequate representation of a Helloween meets Angra style group who give the people what they want- quick hitting and consistent rhythms, sing-a-long verses and choruses abound, a boatload of larger than life keyboard lines and an overabundance of metal community involvement from a happier, brighter perspective.

“Live In Hellvetia” won’t break sales records on the originality scale. It’s very focused and intent on moving the crowd along- forgetting their troubles and celebrating for the glory of power metal. As such, it gets the job done.