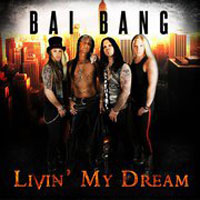 Running around the Swedish scene since the late 80’s, Bai Bang have circulated the globe showcasing their explosive, in your face hard rock style. Touring Canada, Europe, Japan and the United States, “Livin’ My Dream” is their sixth studio album and is a 10 song affair entrenched in sleaze/glam heaviness. “We’re United” has that drum propulsion and upbeat, infectious chorus like “Kickstart My Heart” from Motley Crue, making it ideal to start this record in the right direction. The main vocals and chorus in a song like “Come On” is very much radio friendly and veering dangerously close to Nelson territory, which could send some of the fence sitters in H.E.A.T.’s direction.

Singer Diddi Kastenholt has a natural personality to pull off this good time, party rock material. In the middle of the album, his work on a ballad like “Gonna Have It All” brims with mid 80’s Def Leppard class- shaking with attitude and proper tenderness from verses to chorus to break out your lighters to. I do think the best songs are towards the first half of the album, as “Rock It” is very contrived and juvenile in the ‘rock it-rock it, roll it-roll it’ chorus and closer “Put On Her Dress” has that “Let’s Get Rocked” sameness that only gains separation with Pelle Eliaz’s bluesy guitar licks.

We know the sleaze/conventional hard rock genre is exploding with talent these days, and a majority of the attention falls in Scandinavia. Bai Bang are adequate, but I wouldn’t quite put them in The Poodles, Reckless Love or Hardcore Superstar level in terms of songwriting and excitement. If you’re a have to own everything in one genre person, “Livin’ My Dream” won’t be a bad addition, but otherwise I’d seek out other bands for my sleaze fix.

AIRRACE – Back To The Start