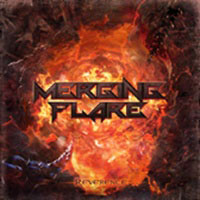 When looking at the booklet for this Finnish band, you have a clue what to expect when you see guitarist Kasperi Heikkinen (Amberian Dawn) wearing a Gamma Ray shirt and find out that Kai Hansen makes a vocal appearance on two of the songs while contributing lead guitar on two others. Further research shows that Kasperi played in Gamma Ray during 2006 and March 2010 while Henjo Richter was recovering from various aliments and injuries. “Reverence” lives in power metal mania, 11 songs full of mid-tempo to speed riffs, furious double bass action and enough large choruses to shake the earth. It may seem like another debut album from a five-piece trying to topple the Helloween throne, but I believe their 10 years of unsigned development through three demo releases and an EP split with Guardians Of Mankind set the stage for a potent, refined and sharp power offering.

“At Daggers Drawn” has that fervent mead hall chorus that sweeps you into the album, a prototype for their German-styled bright harmonies and Helloween meets Iron Savior-like riff march. “Faker” as a follow up features Matias Palm grabbing his nuts and reaching the upper echelon Rob Halford/ Ralf Scheepers notes while Kasperi rattles off ten to fifteen second axe slinging moments that gain favor with all guitar worshippers from Asia to Zimbabwe. When the band keep their arrangements at a mid-tempo anthem level, comparisons to traditional artists like Iron Maiden and Judas Priest come about- such as “Terrordome” and “Pride And Bravery”, the latter being a distant cousin to a lot of “Seventh Son” era material from Eddie’s brigade.

The bonus track is a cover of Riot’s “Sign Of The Crimson Storm”, one of many essential numbers from their fine “Thundersteel” landmark release- and Merging Flare do it justice with all the passion and glory for the cause. Overall the band aren’t necessarily producing songs that move beyond their influences- they just know how to get the job done, kicking out memorable hooks, energy and material that will get the crowds moving.

So “Reverence” is for the standard power maniac who doesn’t want things too progressive but is looking for something in line with their German metal record collection.