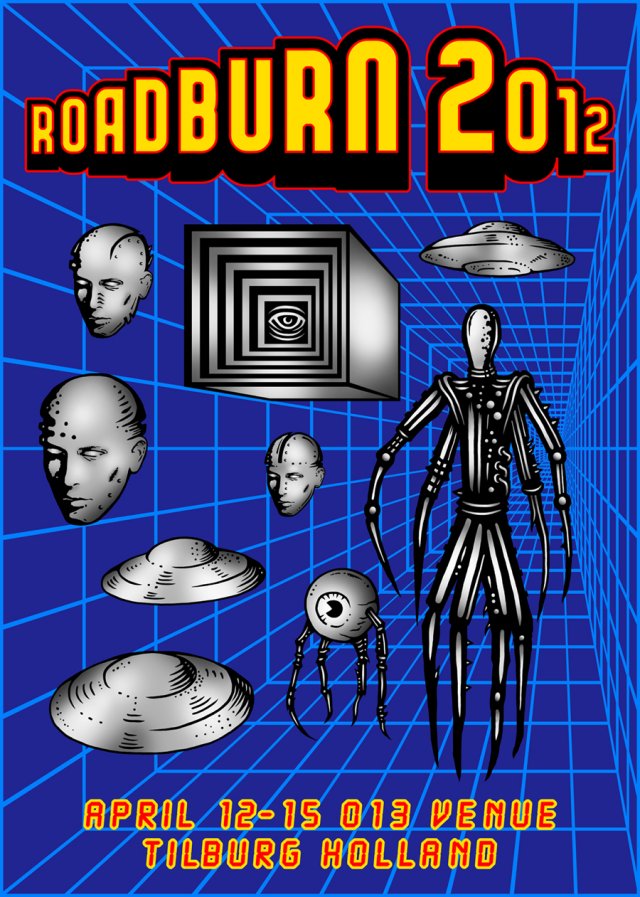 The lineup for Roadburn 2012 is starting to shape up very nicely and we’re are colossally chuffed to welcome Norway’s Ulver to the 1967 edition of Roadburn, headlining on Thursday, April 12th at the 013 venue in Tilburg, Holland. Ulver are without question one of the most varied, unique and talented bands active today, and it promises to be a wild musical ride at their – 1967 performance. We can hardly wait! More info on Ulver at Roadburn Festival 2012 here.

We’re extremely proud to unveil the official artwork for the 2012 festival by Voivod’s Michel "Away" Langevin. Inspired by sci-fi art of the 50’s, 60’s op art and early 80’s computer-game robotic creatures from another galaxy, Away depicts Roadburn as a head spinning, extraterrestrial invasion from a world far beyond the outer limits that only he could imagine. More info on Roadburn Festival 2012 artwork by Voivod’s Michel "Away" Langevin here.

Tickets for Roadburn 2012 will go on sale Saturday, November 26th, 10:00 Central European Time. There will be a 2 ticket limit (per order) for 3-day and 4-day passes and Afterburner tickets. The new 13% tax increase on concert tickets here in the Netherlands is included.

MAGEPLASK og GROWN INTO NOTHING klare for Last Train (20/10)