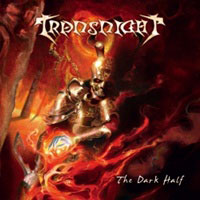 German power metal with a vocalist straight out of the Mark Shelton/ Manilla Road mode – Transnight clawed their way through the ranks with 3 demo releases from 2004-2007 to set up this first album. There are times on this record where the band throw down thrash overtones, especially evident in Daniel Roth’s double bass abilities on “False Prophets” and the title track. For the most part though, “The Dark Half” is an old school power effort, the riffing contains a lot of triplet rhythms a la Iced Earth on songs like “The System” and then more mid-tempo, straight ahead efforts with slight twists of musical dexterity, such as “Bite My Shiny Metal Ass”. or  “Lose Your Time”.

The nasally delivery from Dave renders a lot of the material on this recording very tough to swallow – because it’s one thing to shriek and it’s quite another to just wail over the top of metal and convince people that both mesh together. I don’t mind his lower range, but when he gets into the hysterical sneers and screams people better duck for cover, as you may wish to sew your ears shut. There are some moments on the second part of “Ghost Story” that make me think of Mark Shelton being caught in a vocal vice grip and suffering from a horrible cold – a distressing experience.

The skull and fire cover art from Italian Stefano Moroni plus mastering by noted producer Andy Classen give Transnight a very professional looking and sounding effort. The difficulty lies in how many people will handle an unconventional singer fronting a potent heavy metal band. As a result, “The Dark Half” remains a casual record to return to every once in a great while, and not an out of the box underground masterpiece.