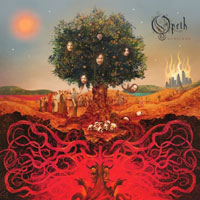 So, where do I begin..? Opeth started as a death metal band back in 1990, developed into a progressive death metal act unlike anyone else, released "Damnation" in 2003, the first album without any growling, which most fans loved, but it also made them loose quite a few followers. (Me? I LOVE it!) This magnificent band has always pushed themselves forward, with mastermind Mikael Åkerfeldt in the front seat, inspired by his love for 70’s obscure prog and the old heroes of bands like Deep Purple and such.

"Ghost Reveries" from 2008 was for me the perfect Opeth album. This mix of prog and death metal struck me like lightning, and to this day this is still my favorite album ever. Then came "Watershed", and again the band pushed the limit a bit further, including female vocals and bossa nova rhythms. And it worked. Could Opeth get away wit anything?

2011 and "Heritage". The album cover? Not bad, different and cool! Travis Smith is the man again, and the art represents the bands history in a amazing way. On to the music. And no death growls at all. A new "Damnation"? Nope. Clean vocals on both, but that’s about it. It’s Opeth, no doubt about that, but only more mellow and down tempo, and …strange. And at times, perhaps to mellow and soft…. And too strange. And uninspired and… boring. Christ on a bike, What am I saying? This is one of my favorite bands, and THE album I have been waiting for ever since "Ghost Reveries". Because let’s face it, "Watershed" was ok, but not much more. And just so it’s said, I love progressive music, new and old, and this is in a way a mix between both, but still, I’m not sure what to make of it.

Understand me right, as always with Opeth, it’s all quality when it comes to performance. And some reviewers are ecstatic. Me? I miss the heavier parts, with the deep growls from dark places, and the dynamic this creates in the music. But then again, the Swedes has done this many times before, so the path they have taken with "Heritage" should perhaps come as no surprise?

Alright, I might just need some time to digest it all. I have listened to the album around 10 times now, and I’m not willing to give up quite yet. But right now, I’m just not impressed at all. That’s just the way it is, and the world will not go down. I mean, I absolutely love the band and the guys, no other band has made more impact on me as a music lover. So I guess it was bound to happen. An average Opeth album.

"I’ve realized my influences for this album are so diverse  that I can’t really say what it sounds like. If I can compare it to any other band, it would have to be Opeth, but it’s different from the stuff we’ve done before.". These are Michael’s own words describing "Heritage". He also added that he didn’t care what anyone else would say about the album. Maybe he will care next time, I sure hope so.